Thirty-six people attended our Food and Film evening yesterday. Eight people had signed up and didn’t come, four were sick and two gridlocked on the M6!
£233.55 was raised for MAP.

Before the film, Suha, a young asylum seeker from spoke movingly about her village near Nablus, the depredations of the Israeli army, the curse of the checkpoints and the virtual imprisonment of the population as the Occupation tightens its grip.

Suha accompanied Cina and Fi to the Palestine Solidarity Campaign AGM on Saturday which Suha described as ‘amazing.’ Being amongst Palestinians and supporters of Palestine was a comfort, reminding her that many people do care about Palestine and its people.

The Lemon Tree was released in 2008 and won several awards. It stands up marvellously nearly 10 years later.

The film is about Salma, a Palestinian widow who earns her living tending to her late father’s lemon grove. When an Israeli government minister moves next door and declares the grove a potential security threat, Salma struggles to defend her peaceful livelihood. Personal drama gives way to political controversies as Salma forms an unexpected bond with the minister’s lonely wife and with the help of a young lawyer takes her protest all the way to the Israeli Supreme Court.

The ASHA Centre proved to be a comfortable venue although I think we will arrange the chairs better next time. Hassan, our chef from Gaza, produced excellent food although not quite enough. He usually over-caters! I felt we had a convivial atmosphere and I wish to record my thanks to ASHA and to all those who turned to and did the washing-up!

For those who don’t know ASHA the centre provides support and services for men, women and families seeking asylum. The Home Office sends many to Stoke-on-Trent because housing is cheap. A great many wait years only for their application to be refused. Not deported for humanitarian reasons and not allowed to work or claim welfare benefit they become destitute. This group is ASHA’s first priority. 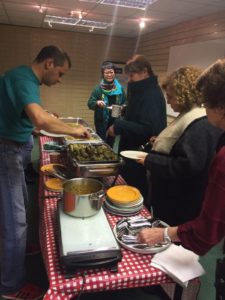